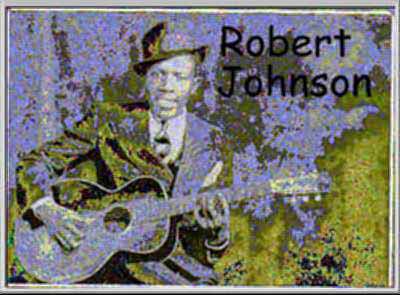 Robert Johnson was most likely born illegitimate on May 8, 1911 in Hazlehurst, Mississippi. He died just 27 years later on August 16, 1938 in Greenwood, Mississippi. When you trace Delta Blues back to its origins, you go to Drew, Mississippi, the heart of the Delta. Delta Blues, as far as we can tell, begins with Charlie Patton. With Charlie were Louise Johnson, Willie Brown, Howlin' Wolf, Tommy Johnson, and Son House, all of which are considered contemporaries of Charlie Patton.

From here, Son House took Robert Johnson under his wing, and soon took Robert out of his seemingly abusive home, and his work in the fields. From here, Robert continued his journeys playing through the Delta.

He was known to be a loner, and to play alone, though he did travel with some folks more than others. Among his companions were Son House. Howlin' Wolf, Johnny Shines, Sonny Boy Williamson, and Elmore James. He is known only to have had two recording sessions in his life:

1936 in a hotel room in San Antonio, and 1937 in a back room in Dallas, by John Hammond. John Hammond returned to the Delta in 1938 looking for Robert for the "Spirituals to Swing" concert in December of 1938, and he found that he had died.

There is much controversy about the life and death of Robert Johnson. The legend has it that he sold his soul to the Devil so that he could play anything. Tommy Johnson's account strikes a frightening realism.

"If you want to learn how to play anything you want to play and learn to make songs yourself, you take you guitar and you go to where the road crosses that way, where a crossroad is. Get there, be sure to get there just a little 'fore midnight that night so you'll know you'll be there. You have your guitar and be playing a piece there by yourself... A big black man will walk up there and take your guitar, and he'll tune it. And then he'll play a piece and hand it back to you. That's the way I learned to play anything I want."

There is also uncertainty to how and where Robert Johnson died, and where he was buried. There are two likely spots where Robert is buried: one at the Mount Zion Baptist Church in Ita Bena Mississippi, and the other at Payne Chapel in Quitto Mississippi. You can see these sites, as well as the proposed location of his last performance, and murder; and the house where he died in Baptist Town, through Pat LeBlanc and the Mississippi Delta Blues Society.